Far From the Sun 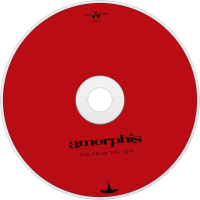 Far from the Sun is the sixth studio album by Finnish heavy metal band Amorphis. It was the first album to feature drummer Jan Rechberger since 1994's Tales from the Thousand Lakes, replacing Pekka Kasari who had quit the band to spend more time with his family. It was their last album to feature Pasi Koskinen on vocals.
The American release is packaged in a slipcase and features five bonus tracks and a video for "Evil Inside". The song, "Darkrooms" is also a bonus track for the Japanese edition.
On the album cover, a "Ukonvasara" (a Finnish type of Mjolnir) is depicted from Norse Mythology.
The album was re-released in Europe in 2008 by Nuclear Blast. This new version includes all the bonus tracks that were previously only available on the American version and also has new artwork.