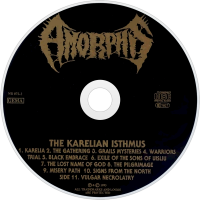 The Karelian Isthmus is the debut album of Finnish metal band Amorphis, released in 1993.
Although The Karelian Isthmus took its name from a historic Finnish battleground, Karelian Isthmus, its lyrics focus on Amorphis's well known epic themes from the history of Finnish warfare and religion, but drawing more from celtic mythology rather than the later traditions of Amorphis's own native land. The epic side is sometimes broken up by the occult lyrical themes in tracks including "Pilgrimage", "Misery Path" and "Black Embrace". In recent years, songs from this album have been receiving more play during Amorphis' live performances, despite being of a different style than their later works.
The album was re-released in 2003 with all the songs from the "Privilege of Evil" EP added as bonus tracks.