Tales From the Thousand Lakes 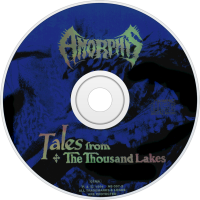 Tales from the Thousand Lakes is the second full-length album by metal band Amorphis. A monumental concept album, the lyrics are based on the Finnish national epic, Kalevala. It was their first departure from the more aggressive death metal sound of their debut album to a more melodic death/doom metal sound, with more influence from early bands influential to doom metal like Black Sabbath and Pentagram. This album features a greater use of synthesizers and clean vocals than their previous release, which was devoid of both.
This was the first Amorphis album to feature Kasper Mårtenson on keyboards. The album was an influential release in the development of the melodic death metal and doom metal genres.
The original limited version (on digipack) had a cover of "Light My Fire" by The Doors added as a bonus track. It was later re-released in 2001 with most tracks from the Black Winter Day EP and the "Light My Fire" cover added as bonus tracks.