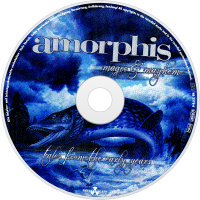 Magic & Mayhem – Tales from the Early Years is a compilation album by the Finnish heavy metal band Amorphis, released on September 15, 2010 in Finland. It's a collection of re-recorded and partially re-arranged songs from their first three studio albums. In addition, the limited edition includes a cover of The Doors song "Light My Fire" as a bonus.
The majority of the vocals are performed by Tomi Joutsen. Vocal performances by Tomi Koivusaari also appear for the first time since 1997.