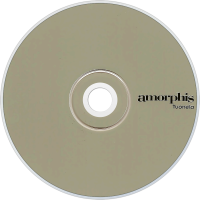 Tuonela is the fourth full-length album by Finnish band Amorphis. It is named for Tuonela, the realm of the dead in Finnish mythology.
This album shares inspiration with many of the band's productions in the text and themes of the Kalevala, or Finnish Epic. The style is less progressive, like its predecessor, Elegy, but rather a stoner/doom metal record, with progressive metal/progressive rock elements, except few more progressive and rock-sounding songs including "Divinity", "The Way", "Summer's End", "Tuonela" and "Northern Lights". The latter is a bonus track for the Japanese edition.
The album was licensed to Nuclear Blast in Europe. A music video was made for the song "Divinity".