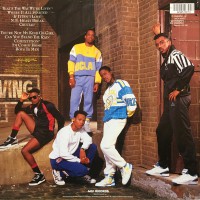 By 1987, New Edition was a group in transition. The band members were aging out of their teens into their twenties, and sought for their image and sound to reflect their coming of age. In addition to employing the famed production team of Jimmy Jam & Terry Lewis (who just the year before had masterminded Janet Jackson’s multi-platinum Control album) to help steer their music into a new direction, they also recruited Washington, D.C.-based baritone/tenor Johnny Gill—who, in 1984, had scored a hit with R&B singer Stacy Lattisaw on "A Perfect Combination".The New Edition members (including Bobby Brown) had actually known Gill since they released their hit "Candy Girl" in 1983 and Gill released his R&B Top 30 hit "Super Love" that same year. They had joked that they would let him in the group if he could improve his dancing skills. Prompting Gill’s entrance into the group was when lead singer Ralph Tresvant considered recording a solo album. To circumvent New Edition being left without a lead singer, Michael Bivins suggested bringing in 20-year-old Gill to replace him. Gill accepted the invitation, joining the group in the spring of 1987. Tresvant, however, wasn’t ready to leave— resulting in New Edition, inadvertently, becoming a quintet again as they began production on their fifth album, Heart Break.

Album Review
Many have called this particular album the most seminal New Edition album. Four fans from Philadelphia in particular were inspired by one of the songs on the album. Ironically, "Boys to Men", the song that Johnny Gill hated recording, ended up becoming the name of the group who changed their name to Boyz II Men.[6] The group would end up being managed and mentored by Michael Bivins. Boyz II Men names New Edition as one of their most influential bands. The album also saw a successful concert tour for the group as well. Through 1988 and 1989, New Edition toured all over the world with opening acts, ex-New Edition member Bobby Brown (who had also found big time success with his breakthrough album, Don't Be Cruel) and Al B. Sure!