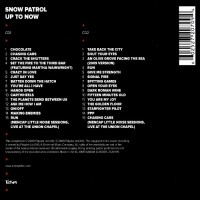 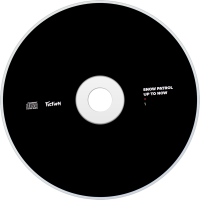 Up to Now is the first compilation album by alternative rock band Snow Patrol. The album features tracks spanning Snow Patrol's fifteen year music career, including tracks from The Reindeer Section, a side-project/supergroup involving musicians from all over Scotland. The album was released in early November 2009, primarily as a two-disc set and a three-disc digipak format containing one DVD of bonus material. A limited edition heavyweight box was also sold. Three new songs were released on the album. One of these was "Just Say Yes", the lead single taken from the compilation. The solo re-recording of "An Olive Grove Facing the Sea" was released as the album's second single. In Netherlands, Belgium and Finland "Run" was re-released in a version called "Run (2010 Version)" in January 2010.
The release has been described by the band as a collection of the band's best loved songs, and not a greatest hits, as the album also contains non-singles. It was received favorably by music critics for not being a typical hits record. The album performed well commercially, reaching the top 5 in three countries and the top 40 in another. It also sold well on the iTunes Store, making the top 10 selling albums lists in various countries.

User Album Review
Although Snow Patrol are a radio playlist mainstay, theirs was not an overnight success. The Dundee-formed band is an example of act that dug in, worked hard, and eventually achieved widespread recognition. Their story is a lesson to fledgling bands only just embarking on a similar journey, proof in these reality television days that stars are not always plucked from a magical ether of questionable talent.
The quintet’s indie credentials run deep ”“ their first two albums were released via the tiny Jeepster label (once home to Belle and Sebastian), and they appeared at the first-ever All Tomorrow’s Parties festival in 2000. Frontman Gary Lightbody collaborated with celebrated Scottish (mostly) instrumentalists Mogwai, and formed The Reindeer Section alongside members of Teenage Fanclub and Arab Strap. Though today they’re as derided for their sound-alike singles as they are for their electrifying choruses and sing-along anthems ”“ one man’s this is another’s that, and so on ”“ Snow Patrol’s roots are admirably arch and counter-mainstream.
That they now enjoy as many daily plays as chart-topping pop-boppers is a happy accident, one that can be both dated and titled: February 2004, and Run. The single, the second to be taken from 2003’s Final Straw album, opened the proverbial floodgates and Snow Patrol’s audience increased dramatically. Hearing it on this best-of collection, alongside more recent hits and also a fair smattering of songs from the band’s Jeepster years, it still crackles with a nervous energy, a bluster that’s self-conscious and uncertain of its intentions. It’s a massive moment in the development of its makers, one that made their name and has perhaps come to represent the very epitome of indie-rock balladry in the 00s. The likes of Keane and Coldplay haven’t come close.
Those who became aware of Snow Patrol around Run’s release will enjoy hearing their earlier work, if only to note just how far they’ve travelled. There’s a faithful who swear by the group’s below-the-radar work ”“ the distorted guitar and wonky synth gurgles of 1997’s Starfighter Pilot are a far cry from the glossy arena-rock of today’s fare ”“ but in this company the pre-Final Straw material is complementary rather than outstanding. It’s scrappy, fun and untidy, illustrating how a band grows over so many years of existence.
Love them or hate them as they are nowadays, you can’t possibly doubt that Snow Patrol have only ever done it for themselves. They do deserve your respect.