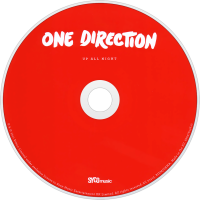 Up All Night is the debut studio album by English-Irish boy band One Direction, released by Syco Records in November 2011 in Ireland and the United Kingdom, followed by a worldwide release during 2012. After finishing third in the seventh series of British reality singing contest The X Factor in December 2010, One Direction began recording the album in Sweden, UK and the United States, working with a variety of writers and producers. The album is predominantly a pop music album which orientates into pop rock, dance-pop, teen pop and power pop. The album's lyrical content regards being young, relationships, heartbreak and empowerment. Staged in support of the album, One Direction performed the album's songs live on televised shows, at awards ceremonies, and during their worldwide Up All Night Tour.
The album received generally favourable reviews from contemporary music critics, many of whom appreciated the album's combination of melodic song craft and catchy, pop-oriented material that, while slickly produced, avoided the commercial cynicism and adult contemporary posturing of some of their '80s and '90s forebears. An international success, the album topped the charts in sixteen countries and, by December 2012, has sold over 4.5 million copies worldwide. The album bowed at number two on the UK Albums Chart and ultimately became the UK's fastest-selling debut album of 2011. Up All Night went straight to number one on the United States Billboard 200, selling 176,000 copies in its first week, making One Direction the first British group in US chart history to achieve this feat with their debut album. They were inducted into the Guinness World Records as a result.
One Direction finished 2012 with two of that year's top five best-selling albums in the United States; Up All Night at number three and their second studio album, Take Me Home, at number five, making the boy band the first act to place two albums in the year-end top five in the Nielsen SoundScan era. In addition, Up All Night became the best-selling album by a group and the best-selling debut album of 2012. Four singles were released from the album, including the UK Singles Chart top ten hits "What Makes You Beautiful", "Gotta Be You", and "One Thing". With over 5 million copies sold worldwide, "What Makes You Beautiful" is among the best-selling singles of all time.