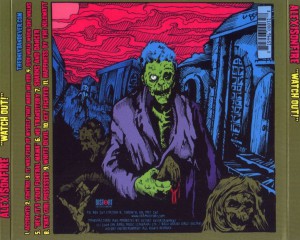 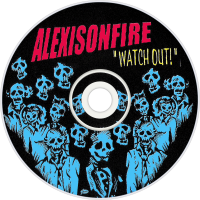 Watch Out! is the second album released by the post-hardcore band Alexisonfire. It was released on June 29, 2004. The album debuted at #6 on the Canadian Albums Chart, selling 6,000 copies in its first week. It was certified platinum in Canada in April 2007.

The cover art for this album is based on the lyrics from "That Girl Possessed", and was illustrated by Justin Winstanley, a tattoo artist who has done many of Dallas Green's tattoos.

The tracks on this album cover a variety of subjects. "'Hey, It's Your Funeral Mama'" is about go-karting, and "White Devil" is about cocaine and the band's previous experiences with friends who used the drug. "That Girl Possessed" is mainly about the girl played by Linda Blair in The Exorcist, and what she experienced during her possession. "Happiness by The Kilowatt", "It Was Fear of Myself That Made Me Odd", and parts of "No Transitory" are based on short stories by Kurt Vonnegut from his collection entitled Welcome to the Monkey House. The stories are "The Euphio Question" / "More Stately Mansions", "Report on the Barnhouse Effect" and "Tomorrow and tomorrow and tomorrow", respectively.

Two songs from this album are covered by indie-rock band Moneen in a conjoined EP release, The Switcheroo Series: Alexisonfire vs. Moneen.