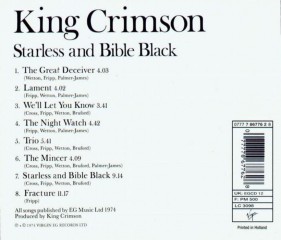 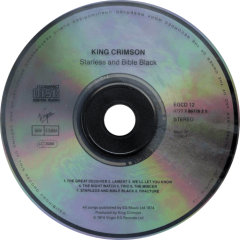 Starless and Bible Black is an album released by the British progressive rock band King Crimson in 1974. Most of the vocal pieces on the album are satires and commentaries on the sleaziness and materialism of society. An exception to this lyrical theme is "The Night Watch".

Even though there are no drums on "Trio", drummer Bill Bruford received co-writing credit because the piece was improvised in concert, and Bruford's decision not to add any percussion was seen by the rest of the band as a crucial choice.[citation needed]
The album art is by painter Tom Phillips. The phrase "this night wounds time", which appears on the back cover, is a quotation from Phillips's signature work, the "treated novel" A Humument (p. 222).
Several songs from the album were recorded live in concert, with applause edited out. The only songs recorded entirely in the studio were the first two tracks, "The Great Deceiver" and "Lament". "We'll Let You Know" was an improvisational piece recorded in Glasgow. "The Mincer" was another improvised piece, recorded in Zürich and overdubbed with Wetton's vocals in the studio. "Trio", "Fracture", and "Starless and Bible Black" were recorded at the Concertgebouw in Amsterdam, as was the introduction to "The Night Watch" (the remainder was recorded in the studio). The complete Amsterdam Concertgebouw concert was released by the band in 1997 as The Night Watch.
The lyrics were composed by former Supertramp guitarist Richard Palmer-James (who left that band after its first, self-titled album). Only four tracks on this album have lyrics. "The Great Deceiver" refers to The Devil and is an ironic commentary on commercialism. The lyric was co-written by Fripp. "Lament" is about fame. "The Night Watch" is a short essay on Rembrandt's painting of the same name, describing the painting as an observer sees it and attempting to understand the subjects.
The phrase "Starless and Bible Black" is a quotation from the poet Dylan Thomas's play, Under Milk Wood. The band's next album, Red, contains a song called simply "Starless", which actually contains the phrase "Starless and bible black", whereas "Starless and Bible Black" is an improvised instrumental. The title track is actually an edit of the original Amsterdam improvisation. The liner notes for The Night Watch Live in Amsterdam Compact Disc indicate that it was edited "due to the constraints of vinyl".
The album's final track, "Fracture", is similar in both style and melodic phrasing to "Larks' Tongues in Aspic Pt. 2". Robert Fripp has stated that "Fracture" is the most difficult guitar piece he has ever played.[citation needed]