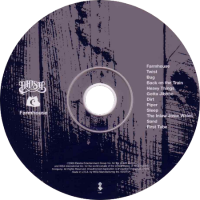 Farmhouse is the eighth official studio album by the American rock band Phish. The tracks were recorded at The Barn, frontman Trey Anastasio's studio in Vermont. The album was released on May 16, 2000, by Elektra Records. Farmhouse was the last Phish studio album before their temporary split in October 2000 (the band subsequently returned in late 2002).

Songwriting for Farmhouse was a joint effort between Trey Anastasio and Phish lyricist Tom Marshall, with contributions from Tony Markellis, Russ Lawton and Scott Herman. All of the songs were already part of Phish's live concert song rotation before being recorded for the album, some dating back to 1997. Rolling Stone gave Farmhouse only 2.5 Stars, stating that on the album the band walks "a thin line between mellow and torpid" with songs that "are going to need a lot of live [concert] resuscitation".

"Heavy Things" became Phish's biggest single to date, and was a hit on Adult Top 40 radio and on the Radio & Records pop 100 chart. The song was performed for live broadcast during the overnight set of Phish's New Year's Eve 2000 show at Big Cypress (reportedly then the largest concert in the world) as part of ABC's coverage of New Year’s festivities around the globe.

The song "First Tube" was nominated for a Grammy for Best Rock Instrumental Performance.

Early incarnations of several tracks from the album can be heard on the 2000 release Trampled by Lambs and Pecked by the Dove, a collection of song sketches recorded by Anastasio and Marshall.

Farmhouse had the highest-ever first week sales for a Phish record. The album was certified gold by RIAA on January 30, 2006.