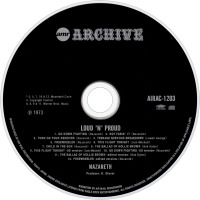 With "Razamanaz" slinging the Dunfermline's finest up where they belonged, there really wasn't time, and sense, to slow down. Tour wheels set in perpetual motion, creative juices were in constant flow, too, so the quartet's fourth album crystallized their ideas even more solidly to render "Loud 'n' Proud" not simply a follow-up but a sequel to their previous LP. Again it starts with a smash, "Go Down Fighting", to blow off any barrier there could be, yet this time the chugging riff is oiled with Manny Charlton's slide and sags acoustically in fine style on the verses to let Dan McCafferty deliver his silvery rap for adrenalin to kick in measured doses, as it does in another intent-clearing number, the wah-wah-awashed "Freewheeler" that harks back to the '60s rhythm-and-blues while adding a nice weight to its meandering trajectory and taking it spaceward guitar-wise.

After that, the energy level never lets down, the tension growing even more on less speedy numbers such as the closer, the drone-filled, heavy metal take on Dylan's grim "The Ballad Of Hollis Brown", and one of the NAZ's most glorious covers, Joni Mitchell's "This Flight Tonight" that the Scots make their own by hanging the farewell sadness on Pete Agnew's unrelenting bass that holds the rest - scorching vocals, outlandish six-string web, catchy percussion - together. And then there's some good-time rockers like a bare-bone appropriation of LITTLE FEAT's "Teenage Nervous Breakdown" and the group's own contagious "Turn On Your Receiver", where, thanks to Darrel Sweet's tom tom's thunder, the middle eight elevates the radio-friendly groove to a Zen height, even more breathtaking in a live BBC version among the bonus cuts.

Somewhat deeper feels "Not Faking It" with which the foursome merrily elbow their producer Roger Glover's main act, DEEP PURPLE, and show their infectious humor by heaping themselves in with both the famous and infamous, thus creating a mythology of their own. The only chance to breathe in on the album comes in the shape of "Child In The Sun", the West Coast-kissed ballad that grows in the harmonic scope as it progresses to an anthemic a cappella climax. Once the ripples calm down, there's no doubt left as to why the volume is linked to the majestic in the title.