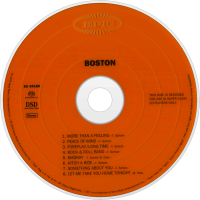 "Boston" is the debut album by American rock band Boston recorded during October 1975 through April 1976 at Foxglove Studios in Watertown, (Massachusetts), the Capitol Studios in Hollywood (California), and The Record Plant in Los Angeles (California). The album was released in July 25th, 1976 on Epic Records. Produced by John Boylan, Tom Scholz.