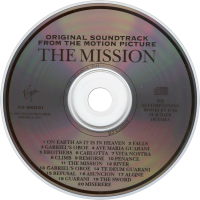 The Mission soundtrack was written by Ennio Morricone. Beginning with a liturgical piece (On Earth as It Is In Heaven) which becomes the "Spanish" theme, it moves quickly to the "Guaraní" theme, which is written in a heavily native style and uses several indigenous instruments. Later, Morricone defines the "Mission" theme as a duet between the "Spanish" and "Guaraní" themes. Other themes throughout the movie include the "Penance", "Conquest", and "Ave Maria Guaraní" themes. In the latter, a huge choir of indigenous people sing a haunting rendition of "Ave Maria" in their native language.