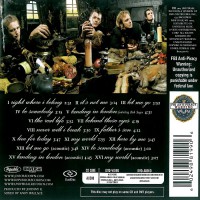 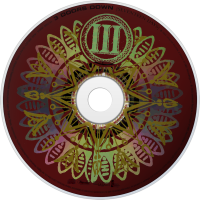 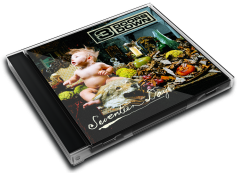 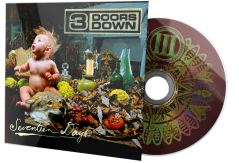 Seventeen Days is the third studio album by American rock group 3 Doors Down, released on February 8, 2005, five years to the day that 3 Doors Down released their debut album, The Better Life.
It is 3 Doors Down's first album in the three years since 2002's Away from the Sun. It topped the chart on the Billboard 200 soon after it was released. Bob Seger sings a duet with lead singer, Brad Arnold, on the song "Landing in London".

Album Review
Mississippi rockers 3 Doors Down return to the studio for their third album, Seventeen Days. Four years after forming, 3 Doors Down released their debut, "The Better Life" and with it came the HUGE singles "Kryptonite" and "Be Like That" both contributing to the albums success. In 2002 they released their sophomore album, "Away From The Sun" which was a much more ballad-filled album, and it had it's share of great singles such as "Here Without You" and "When I'm Gone"

The album starts off with "Right Where I Belong" and It has some of the best Guitar riffs 3DD has ever done. Arnolds vocal are instantly hooky. One negative, the song is way too short, clocking in at just over two and a half minutes. If any of you have listened to 3DD's Another 700 Miles EP, you will instantly know "It's Not Me" which was recorded when they were in New Orleans

"Let Me Go" is the lead single on Seventeen Days, but it seems to lack any catchy guitar hooks or chorus, the chorus is very repetitive and does not accomplish anything."Be Somebody" is one of those songs that come out of the 3 Doors Down cookie cutter mold, that said, it's still a pretty consistent track, that comes in at about three and a quarter minutes long.

And then comes "Landing In London", the violins on this track are very clichéd, but the song is not bad at all. It features Bob Seger. Unfortunately, he does not appear anywhere else on Seventeen Days to keep the album from being somewhat boring. Then there's "The Real Life" which sounds like a sequel to the song "Better Life" , it isn't though. it doesn't rock very hard but Arnold's vocals are soulful here.

"Behind Those Eyes" uses a catch chorus to draw the listener into the music, this is how good 3 Doors Down can do if they actually tried. Henderson and Robert's guitar-work is excellent on this track, and the flow of this song really makes it shine. "Never Will I Break" comes off with another riff-filled southern rock track that starts off slow before launching into something special. "Father's Son" is reminiscent of Skynyrd except with sub-par vocals. If only they'd regain the edge that helped them with Away From The Sun, 3 Doors Down might be a force to be reckoned with. The moody interlude including violins is something different, but still doesn't save the song from be derivative. "Live For Today" is a punchy- introed track that slacks off a lot, at first the song makes you believe it's a heavy track, but then turns into nearly religious-themed vocals. Altogether, It's not that bad, but it could be a lot better.

"My World," a song that just reeks of song cloning, and Brads lyrics are almost as bad as Nickleback's have gotten, as he strains for the notes."Here By Me" is a chilling ballad that parallels "Here Without You" Arnold sings with passionate vocals on this song, giving us a interesting closer to Seventeen Days

This album is no Away From The Sun nor The Better Life, it's far from It, but It's not bad. I would personally say that its a good southern rock album. I've been a fan since The Better Life and I'm almost certain they could have done a better job.

Would I recommend Seventeen Days" If you are a 3DD fan and want a solid album from them, obviously buy it, but if you are just getting into 3 Doors Down, I would recommend picking up Away From The Sun.