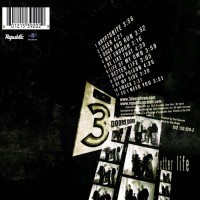 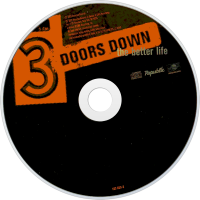 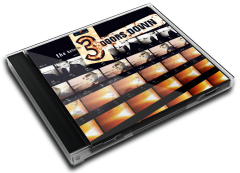 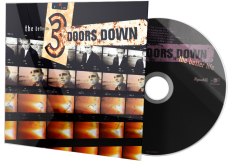 The Better Life is the first studio album by American rock band 3 Doors Down, released on February 8, 2000. It has become 6 times Platinum since release. This is the only album that lead singer Brad Arnold played drums on. "Kryptonite", "Loser", and "Be Like That" all reached the Billboard Hot 100 charts, peaking at #3, #55, and #24, respectively. The Better Life sold 6 million copies worldwide. The album peaked at position #1 at the heatseekers albums chart.

Album Review
This is 3 Doors Downs debut album The Better Life which, in my opinion is the best of their three albums so far and the least commercial (Each album has sadly been more mainstream than the last). Most of the songs I believe are easily the heaviest and most original songs by them that arent completely repetitive unlike their other two albums and Brad has some of the best lyrics hes written from the entire album. So here we go

Easily the most recognized song from the album and a solid song as well. The first minute has the song going nice and softly with some good guitars and drumming. The bass, however is, as with pretty much the rest of the album, nothing special excluding a couple songs. The lyrics are nice and catchy, but I find this to get boring after a few listens. 4/5

A fairly solid track, the lyrics are okay and the music is pretty quiet for the first half. At 2:30 there is an awesome guitar solo that kind of is repetitive, but the entire band plays along with it making it some of the best music the band has ever done. After thats over the rest of the song repeats the first half. 3.5/5

One of my favorite tracks from the album, Duck and Run has some nice lyrics about how tough it is living in the world and great music, with some of the best bass from Todd and great guitars, but the drums arent that good. The song can get somewhat repetitive, but is still a solid track from the band nonetheless. Personally I would give the song 4.5 stars, but I dont want the review to be to biased. 4/5

The beginning of the song has a nice intro with some guitar and okay bass, at :28 seconds the guitar (with a following bass) gets nice and heavy, then slows down after a bit and Brad starts singing about love and how he cant share his feelings or something like that Im not really sure. The song trades back and forth from being slow to heavy before fading out and ending. 3.5/5

This song is one of the saddest songs by 3 Doors Down Ive ever heard. The song can really choke me up, with some excellent music in all departments including an acoustic guitar in the background and excellent (saddening) lyrics this is the one song I will remember 3 Doors Down for, for the rest of my life. 5/5

He spend his nights in California, watching the stars on the big screen.
Then he lies awake and he wonders, why cant that be me"
Cause in his life he is filled with all these good intentions.
Hes left a lot things hed rather not mention right now.
Just before he says goodnight, he looks up at me and he says,
if I could be like that, I would give anything.
Just to live one day, in those shoes.

Another of my favorites from this album, unsurprisingly starts of slow but builds up around the one minute mark. The lyrics in this song are pretty much about living your own life, feelings, and learning along the way. The music is nice with good drumming, but the song mainly focuses on the lyrics, making it one of the catchiest songs lyrically on the album. 4/5

The title track without the first word the. This is deffently the best song on the album musically. The bass mainly follows the guitar, but is still excellent and the drums are the best (in my opinion ) on the album. The lyrics are good, but not Brads best. This is the song on the album save Be Like That. Again, personally 5 star song, but once again dont want to be to biased. 4.5/5

A really great, heavy intro tricked me into thinking the first time I listened to this that this would be a heavy song, but slows down quickly. The song gets heavy with the bass sometimes, but the inclusion of the acoustic guitar can get annoying. Drums are average and electric guitar is nice. The lyrics are great and I really how Brad sings the entire song. The outro gets heavy out of nowhere and is really awesome with the bass and drums. 5/5

Another heavy intro with some of the best guitar and bass work Ive heard on this album throughout the song. The drumming holds everything in place well along with the bass on the verse and pre-chorus. Brad sings the song very well and the first guitar solo is really good, but seems a little out of place to me. If the song was longer it would have been better and the second one is nice and quick, but there is no need for it. The song goes out well fading. 4.5/5

The shortest song, while nice and heavy the songs seems boring to me and the ending isnt that good. The instruments are good, but nothing really stands out. The lyrics I thought werent to good. I almost want to say that the band tried to make a punk love song, but fail miserably at it. I would have to call the song the runt of the album. The song isnt bad or anything just boring. 2.5/5

I really love the intro with the guitar and affects, whatever it is. The song is clearly a love song, but its really good actually. The bass is pretty bland and drums are okay. I liked the guitars and the lyrics if I read them before I heard the song I would think that I wouldnt like, but its a nice surprise overall. I dont think it was really a good ending for the song though, By My Side would have been a good ending. 4/5


Overall this is a great debut album from 3 Doors Down and the singles arent the best to go by whether or not to by the album. I really cant believe though that this is the same band that released the dismal Seventeen Days. Overall, I would have to give The Better Life 4 stars out of 5.