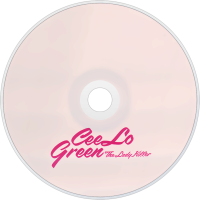 The album debuted at number nine on the US Billboard 200 chart, selling 41,000 copies in its first week. It achieved respectable chart success elsewhere and produced three singles, including the international hit "Fuck You". The album has sold 498,000 copies in the United States as of October 2012, and it has been certified double platinum in the United Kingdom. Upon its release, The Lady Killer received rave reviews from music critics, who praised its production, classicist soul music approach, and Green's singing.

Album Review
When you’ve a voice as powerful as Atlanta-born Thomas Callaway’s, it’s not going to stay unheard for too long. As Cee-Lo – with or without the Green – Callaway has moulded himself into a chart-topping artist. But success has been far from immediate. Three albums with Goodie Mob in the 90s and a debut solo disc of 2002 were overlooked by British listeners; his second fared better, but was more of a niche concern that a genuine mainstream contender. Fame arrived with Gnarls Barkley, though – Callaway’s hook-up with Danger Mouse produced the global smash-hit Crazy in 2006, and ever since his whirlwind of a voice has been tearing up charts worldwide.

With Gnarls Barkley on hold as Danger Mouse works with Broken Bells, the time is perfect for Cee-Lo’s solo return. And the start to this record’s life could not have been better: lead single Forget You, also here in its foul-mouthed version, topped the British singles chart in the summer. It’s a one-dimensional account of a lover straying due to material attachments, suitably cliché-riddled; but Callaway’s voice is such a potent device that the song becomes an addictive anthem to middle-finger salutes of all varieties.

Brilliantly, it’s nowhere near the best track on The Lady Killer. Please rolls to a jazzy trip hop beat, Callaway’s opening exclamation of feeling tired through chasing the dream soaked in the kind of sincerity that the majority of today’s pop stars – those produced by the machine, rather than raised on passion – can only dream of. There’s so much experience in this voice, so many lost hours, so much unachieved. He’s getting there, but the slow process is taking its toll; optimism is always kept in check by the nagging sense that the rug could be pulled from under at any second.

I Want You is another slow jam, which for all its glitter possesses a melancholic centre – Callaway sighs that the "thrill is gone", so now he must escape to rebuild himself, and his relationships, from the bottom up. Old Fashioned feels just that, but in a wonderful way – a gently swinging affair with sumptuous female backing vocals. Cry Baby sings of desire, but also exposes its protagonist’s shortcomings as the root cause of any obstacle between should-be partners. And Fool for You is the closest an artist of today will come to capturing the magic that made Marvin Gaye such a captivating talent. Throughout, a rich seam of Motown and Chess influences runs for all to hear.

With material of a standard to match his fantastic pipes, here Callaway has crafted his finest Cee-Lo long-player yet.