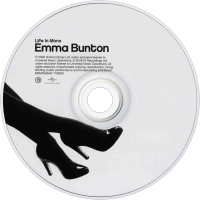 Life in Mono is the third studio album by British pop singer Emma Bunton. The album was originally set for a November release in the UK, however it was later pushed back to the December 4, 2006. Life In Mono, much like her previous album, Free Me, experimented with elements of 1960s pop music. For this particular album the musical arrangement was more directed towards the 1960s French pop music, with some elements of British 1960s pop and Motown. The first single taken from the album was a cover of Petula Clark's 1964 hit single "Downtown", released on November 13. "Downtown" is the 2006 BBC Children in Need official charity single and reached #3 in the UK singles chart. "All I Need to Know" was released as second single.

Bunton had been working on her third release since winter 2004. The album's title track is a cover version of the hit "Life in Mono" by 1990s trip hop band Mono, best known through its usage in the 1998 film Great Expectations. The track "Take Me to Another Town" contains a sample from Herb Alpert's 1965 "Green Peppers".

Due to Emma’s pregnancy all forms of promotion were canceled after a few months. Rumors of a third single surfaced through sites after Emma stated she was thinking of releasing a third single, however this never came. The songs I Wasn’t Looking (When I Found Love), Perfect Strangers and Take Me To Another Town were rumored.

Although it sold almost 13,000 copies in its first week, the album was Emma's first not to reach the UK Top10. It debuted on the UK Albums Chart at #65 on December 10, 2006 falling to #75 in its second week and dropped out of the chart the following week. On the whole, the album sold around 70,000 copies in the UK.

User Album Review
We've been crying out for a decent British female pop singer for ages now. So it's a good job that in 2006, Amy Winehouse came back, drawing huge influences from sixties girl groups and surprised us all with a belter of an album. Flip round to the other side of the spectrum, and here comes Emma Bunton checking out those same sixties vibes, but singing nursery rhymes, skipping happily, and handing out muffins to children.
A third solo album from a Spice Girl is no mean feat. Mel C might have managed it through setting up her own label, but Emma joins only Geri in releasing such an album through a major label.
Emma’s current high-profile status through Strictly Come Dancing, and Children in Need ensured that her cover of Petula Clark's magnificent “Downtown” was propelled into the top 5. But there's little on this album that could see Emma bothering it again.
That's not to say little ol' Baby Spice hasn't tried - she's even got Cathy "Toxic" Dennis to work on the winkling "Mischievous". But while she may be continuing the Sixties vibe of Free Me, there's nothing that even flirts with the beehive razzamatazz of "Maybe". Tuneless opener "All I Need to Know" manages to make 4 minutes feel like they last an hour, while the saccharine "He Loves Me Not" is enough to make anyone feel queasy.
In fact, apart from "Mischievous", the saving grace on Life in Mono is the Bond theme-esque title track itself. It's a lush, orchestral cover of a late-90s single by trip-hop ensemble - Mono - presumably plucked from the archives during the sleep-walk Emma was in when recording this album.