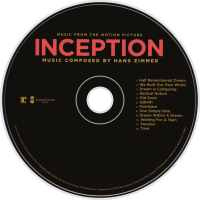 The score for Inception was written by Hans Zimmer, who described his work as "a very electronic, dense score", filled with "nostalgia and sadness" to match Cobb's feelings throughout the film. The music was written simultaneously to filming, and features a guitar sound reminiscent of Ennio Morricone, played by Johnny Marr, former guitarist of The Smiths. Ã‰dith Piaf's "Non, je ne regrette rien" appears recurringly throughout the film, and Zimmer reworked pieces of the song into cues of the score. A soundtrack album was released on July 11, 2010 by Reprise Records. Hans Zimmer's music was nominated for an Academy Award in the Best Original Score category in 2011, losing to Trent Reznor and Atticus Ross of The Social Network.