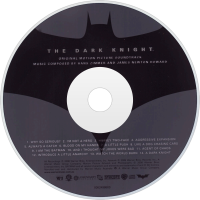 Batman Begins composers Hans Zimmer and James Newton Howard returned to score the sequel. Composition began before shooting, and during filming Nolan received an iPod with ten hours of recordings. Their nine-minute suite for the Joker, "Why So Serious?," is based around two notes. Zimmer compared its style to that of Kraftwerk, a band from his native Germany, as well as bands like The Damned. When Ledger died, Zimmer felt like scrapping and composing a new theme, but decided that he could not be sentimental and compromise the "evil [Ledger's performance] projects." Howard composed Dent's "elegant and beautiful" themes, which are brass-focused.