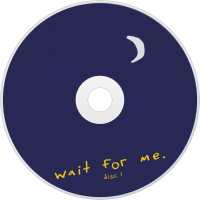 Wait for Me is the ninth studio album by American electronica musician Moby, released on June 29, 2009. Moby announced the title, track listing, and release date of the album on his website on April 14, 2009.
The first single from the album was "Shot in the Back of the Head". The song's accompanying music video was directed by David Lynch. The videos to "Pale Horses" and "Mistake" feature the alien shown on the cover and a dog. The alien is a new design of "Little Idiot" who appeared in earlier videos (the videos for Play's "Why Does My Heart Feel So Bad?" and "Natural Blues" are both examples) and is also the name of Moby's own label, on which the album was released.
The album was re-released as a Deluxe Edition on November 23, 2009 featuring the complete Wait for Me original album, two new songs (including the brand new single "One Time We Lived"), an extra CD of ambient versions of almost all the songs, and a DVD featuring many recent live performances, an intimate EPK of the album, a section of questions and answers, and five music videos made for the album.[14]

Album Review
Moby claims his ninth album was inspired by a David Lynch speech about how creativity for its own sake is a good thing. This disregard of commercial necessity may seem unlikely for the popular dance guru who allowed every song on 1999's Play to be used on an advert, TV or film soundtrack, but he mostly sticks with the game plan.
There are exceptions: a couple of future dinner party staples pepper this set, with the airy synth waves of Slow Light sounding especially clichÃ©d. Study War is worse - a tired mix of minor piano chords and croaky old political speech samples that's just worthy sonic potpourri from the man who invented it.
Yet when the world's most famous vegan is not recycling his own work Wait For Me is an elegant, thoughtful record. Shot In The Back Of The Head features lurching backwards loops and desert-noir guitar wailing; Mistake sees our man vocally mimic a NYC neighbour amid early REM longing; while Scream Pilots pairs Bruce Kaphan and Brian Eno's panoramic soundscapes in tender fashion.
Commendable as it is for Moby to take the hit-eschewing road, the 16 tracks here are epitomised by Isolate, a slightly woozy Boards of Canada-esque number that trots along as pleasantly and inoffensively as an afternoon country stroll.
It would have been more fun to hear the bod who made the killer rave anthem Go take on dance music again. Better still, he could've taken things properly Lynchian and made the entire album a nonsensical dream sequence with a backwards-talking dwarf on it.