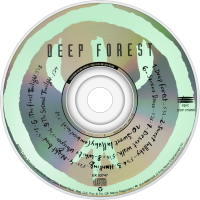 Deep Forest is the first and eponymous album by the musical group Deep Forest: French duo Eric Mouquet and Michel Sanchez. The album mixes New Age electronics with UNESCO field recordings of music from Zaire, the Solomon Islands, Burundi, Tibesti and the Sahel. A percentage of the profits from sales of Deep Forest goes to the Pygmy Fund, a California-based organization committed to helping the natives of central Africa cope with environmental threats to their homeland. But for Sanchez and Mouquet, the most important purpose of the record is to express their own fascination with the Pygmies - and open the world's ears to the exquisite sound of a quickly vanishing culture. As Mouquet notes, "It's not very often you can hear a Pygmy singing on the radio."
It was nominated for Grammy Award as Best World Music Album in 1994.
The songs "Sweet Lullaby", "Deep Forest", "Forest Hymn" and "Savana Dance" were released as singles, the first two of which became hits worldwide.
More than 3,000,000 copies of the album have been sold. The album became Platinum in the USA, France and New Zealand; Double Platinum in Australia and Greece; and Gold in the UK and Norway. The album was certified 2x Diamond by the SNEP Export Awards in 2002.
In 2005 Joni Mitchell included two tracks from this album, "Night Bird" and "The First Twilight" as related to her musical development on her "Artist's Choice" CD. She probably found the "found sound" aspect of the Pygmie recordings reminiscent of her 1975 track "The Jungle Line" (The Hissing of Summer Lawns), where she added her own song about Rousseau's art atop a track of Burundi tribal drumming.