10) Love Will Tear Us Apart 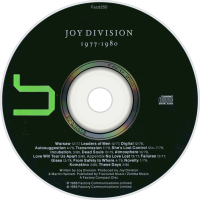 Substance 1977-1980 is a singles compilation album by the post-punk band Joy Division, released on Factory Records in 1988. It is companion to a similar singles compilation by their subsequent band New Order, also entitled Substance. It peaked at #7 in the UK album chart and #146 on the Billboard 200, the band's only chart appearance in the United States. It also reached #15 in New Zealand and #53 in Australia in August 1988.