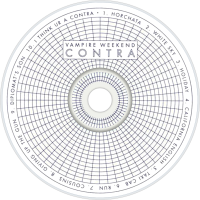 The band's second album, Contra, was released on January 11, 2010 in the UK and the following day in the US. On January 12, 2010, "Horchata" was released as a free download on the band's website. The album's first single, "Cousins", was released on November 17, 2009. Initial copies of the CD and LP sold at independent records stores in the US include a 3-track bonus CD containing two "melts", which featured bits of album tracks and a remix. Contra was the band's first album to debut at No. 1 on the Billboard 200.
On January 9, 2010 the band did an acoustic show for MTV Unplugged. The following month, the band toured Europe and Canada with Canadian electro duo Fan Death as their support. The video for their next single "Giving Up the Gun" was also released on February 18, 2010 which included cameos from Joe Jonas, Lil Jon, RZA and Jake Gyllenhaal.
They also played festivals across the USA such as Coachella, Bonnaroo, Austin City Limits Music Festival, and All Points West, as well as the Groovin' The Moo festival in Australia. Their third single, "Holiday", was released on June 7, 2010.
On June 25, 2010, the band played the Pyramid Stage at Glastonbury Festival, in Pilton, Somerset, UK. The band were also on the main stage at T in the Park 2010 at Balado Kinross, Scotland, on June 8, and played the Oxegen Festival in Kildare, Ireland on July 9. They also headlined the Latitude Festival in Suffolk, UK on July 18. On 16 July the band headlined the Main Stage at the Festival Internacional de Benicàssim. In the summer of 2010 the band played at the Utopia stage on Peace and Love, Sweden's biggest Festival. On July 30, 2010, the band played at Jisan Valley Rock Festival in South Korea along with Muse, Massive Attack, Pet Shop Boys, Corinne http://blogs.wsj.com/law/2010/07/20/the-vampire-weekend-suit-much-ado-about-an-old-photo/
In 2010, Vampire Weekend embarked on a North American tour with Beach House and Dum Dum Girls. The tour started off on August 27, 2010, in Vancouver, British Columbia at the Malkin Bowl. Koenig mentioned to the audience that before this concert, the band had the longest "vacation period" that they have had in a while.
Contra was nominated for a Grammy for Best Alternative Music Album, but lost to The Black Keys's Brothers.

Album Review
With their penchant for obscure grammatical references and African pop, Vampire Weekend always offered a little more than your standard indie-rock fare. Their hugely popular 2008 self-titled debut was chock-full of catchy guitar ditties, but while they clearly enjoyed romping through the frothy stuff this super-savvy NYC four were ultimately aiming for something, well, grander. And with cleverly constructed follow-up Contra, they are well on the way to achieving it.
Now, this beguiling ten-track work is short at just over 30 minutes long, but immediate it is not. Tasters Horchata and Cousins are probably the most hum-able of the lot. Where the album really comes into its own, however, is in the delicate arrangements and luscious production. It’s not so much the melodies that stick in your head, but certain percussive interludes, Ezra Koenig’s vocal gymnastics (tightly woven into the instrumentation) and the skilfully placed sumptuous string trill refrains.
It’s hard to digest at first, but with repeated listens Contra becomes increasingly enjoyable and, in places, quite magical. Musical tricks pop up throughout: the playful climax of White Sky, the romantic Taxi Cab with its Chopin-esque piano, and Giving Up the Gun’s astonishing mix of buzzing guitars, glockenspiel taps, electronics and choral harmonies.
Perhaps the highlights of Contra, however, are closers Diplomat’s Son and I Think Ur a Contra. Both are quiet and slow-paced, but driven by the kind of enviable creativity that now elevates Vampire Weekend well above their peers. There is everything from M.I.A. to classical, folk and reggae influences in there, but the band make the resulting sound completely their own.
Prior to release, frontman Koenig told the music press that Contra is about “retro gaming and Nicaraguan politics,” and it may well be – his poetic lyrics can be hard to decipher. What we do know, however, is that this latest offering ushers in an entirely new age for Vampire Weekend: one of wisdom, grace, subtlety and for the first time a really strong sense of identity. A thoroughly grown-up record, then.