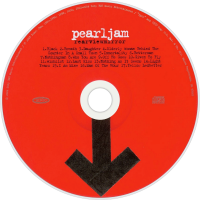 Rearviewmirror (Greatest Hits 1991-2003) is a two-disc compilation album by the American alternative rock band Pearl Jam, released on November 16, 2004 through Epic Records. The album has been certified platinum by the RIAA in the United States, making it the most recent release by the band to attain Platinum status.
The compilation debuted at number 16 on the Billboard 200 chart, selling 96,000 copies in its first week of release. rearviewmirror (Greatest Hits 1991-2003) has been certified platinum by the RIAA.
The tracks "Once", "Alive," and "Black" have been remixed by Brendan O'Brien. Pearl Jam's version of the Victoria Williams song "Crazy Mary" was supposed to appear on disc two, but was replaced with "Man of the Hour" before release. This release marked the end of Pearl Jam's contractual agreement with Epic Records.
Allmusic staff writer Stephen Thomas Erlewine gave the album four and a half out of five stars. He said that the album "does an expert job not only of capturing the moment when Pearl Jam were monstrously popular, but proving that they still turned out good music even when they were fading from the spotlight. Unlike most career-spanning, multi-disc retrospectives, Rearviewmirror does not emphasize latter-day albums in order to achieve a sense of balance that's inherently phony." Rolling Stone staff writer Christian Hoard gave the album four out of five stars, saying, "Pearl Jam have spent much of this decade courting devotees with a series of live bootlegs, so Rearviewmirror is a welcome concession to casual fans, rounding out the hits with concert staples and non-album cuts. The rockers on the "Up Side" disc sum up the band's continually evolving relationship with effects pedals and emotional catharsis; the slower "Down Side" disc offers gold sounds that are long on big choruses and well-worn sincerity."