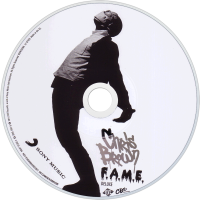 Musically, F.A.M.E. combines the musical genres of R&B, pop, hip hop and Europop. Upon its release, the album received mixed reviews from most music critics, who were ambivalent towards its songwriting and material. The album debuted at number one on the US Billboard 200 chart, with first-week sales of 270,000, Brown's first number-one album in the United States. It was certified gold by the Recording Industry Association of America (RIAA), for selling more than 500,000 copies. The album garnered three Grammy Award nominations at the 54th annual ceremony, eventually winning Best R&B Album. F.A.M.E. also won Album of the Year at the 2011 Soul Train Music Awards.

The album spawned three hit singles, "Yeah 3x", "Look at Me Now" and "Beautiful People". "Yeah 3x" and "Beautiful People" were commercially successful in Oceania and some European regions. In the United States, "Look at Me Now" reached number one on the Hot R&B/Hip-Hop Songs and Hot Rap Songs charts. To support the album, Brown embarked on his F.A.M.E. Tour in Australia and North America.

Album Review
Whether you can hum a Chris Brown hit or not, you're sure to know something about the US RnB singer – chances are concerning his 2009 conviction for the assault of his then girlfriend Rihanna. However, even after brooking the 18-track deluxe version of F.A.M.E. – that acronym stands for both "Fans Are My Everything" and, more tellingly, "Forgiving All My Enemies" – you'll still struggle to answer the question: "Who is Chris Brown?"

That's because, on this evidence, the tarnished star has yet to consolidate his artistic identity. R Kelly-esque sex God? Usher-style party-starter? Rival to Timberlake's precariously-poised King of Pop crown? All of the above, please! Brown's identity crisis is betrayed most blatantly by the sequencing of Wet the Bed, a grisly sex jam built around drip-drop sound effects, just two tracks after Next to You, his wholesome-as-homemade-chutney hook-up with Justin Bieber. It's also tricky to take him entirely seriously when he and his collaborators seem keen to scrape the bottom of the obnoxiousness barrel – who decided the chorus of She Ain't You should feature Brown harmonising with a Rihanna sound-alike?

However, despite these lapses in taste, and a glut of unadventurous mid-tempo RnB cuts, F.A.M.E. is no catastrophe. Brown can sell a club-pop tune like M&S can sell a tuna mayo sarnie at lunchtime; he's at his most ingratiating when he channels Off the Wall-era Michael Jackson on Say It With Me, unites with house DJ Benny Benassi for the electronic throb of Beautiful People, and conflates recent Black Eyed Peas, Usher and Jay Sean hits into the infectious Yeah 3x. The Ryan Tedder-ish soft rock of All Back, meanwhile, proves that he can carry a ballad.

So, while he fails to reward those fans who are everything to him with a great collection of pop-RnB, Brown at least gives them reason to believe. At 21, he remains enough of a fledgling to forge a more fully-formed musical identity as he matures. Crucially, having sent two singles into the top 10 this year already – Yeah 3x and the Chipmunk-assisted Champion – the MP3-downloading public seems willing to give him that chance.