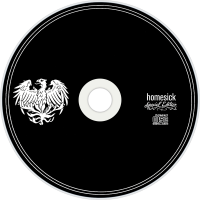 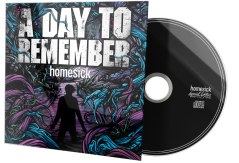 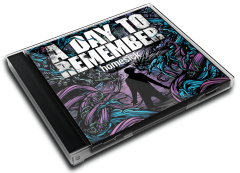 Homesick is the third studio album by A Day to Remember, released on February 2, 2009 in Europe and February 3, 2009 in the United States. The album charted at number 21 on the Billboard 200, number 2 on Hard Rock Albums, number 1 on Top Independent Albums, and sold 22,000 copies in its first week. It was produced by Chad Gilbert of New Found Glory and mixed by Adam Dutkiewicz of Killswitch Engage. The album has sold 215,000 copies to date in the United States. It has come to be regarded as the band's breakthrough album. It was the band's final album featuring Tom Denney on guitar.

Album Review
I know it's difficult, but let's try to be objective here. A Day to Remember is one of those bands who mixes hardcore with pop-punk in a way that makes music snobs cringe, and gets young kids screaming for more. I would probably fall into the former category, holding my ideals and musical integrity high while rolling my eyes at the next trend. But who am I kidding? I love a sunny chorus just as much as my young sister, and you just might too. It's okay if you don't want to admit it.

A Day to Remember has become enormous because of Homesick, selling out large venues and generating hundreds of thousands of MySpace plays a day, though that can be partially chalked up to their covers of "Since U Been Gone" (Kelly Clarkson) and "Over My Head (Cable Car)" (the Fray). So how did they get so popular? Simply by making an album that appeals to just about everyone.

Homesick begins with the album's first single, "The Downfall of Us All," containing an intro of the band doing an a capella breakdown, which gives way to a thunderous actual breakdown. It's a little gimmicky, but at least they sound like they're having fun.

From there, every song follows nearly the same structure:

Verse with singing, maybe some screaming.
Big catchy chorus with no screaming.
Second verse, usually half-sung, then half-screamed and some guitar chugging.
Big catchy chorus again, no variation from the first.
Bridge or middle section, always a breakdown, at least some chugging.
Big catchy chorus.
There are maybe three songs that stray from this formula, and when they do it's still not very impressive. So we have an album that is committed to hitting the listener in one specific way, over and over, never bucking expectation. But don't walk away from it yet. The undeniable quality of Homesick is its melodic competence. Jeremy McKinnon is a vocalist that can scream like a pro and still sing with the same assured talent, which makes for a slew of songs that stick like glue. "Have Faith in Me" sounds like their tribute to a band that surely influenced them (the guitarist has "BLINK182" tattooed on his knuckles, so take a guess), yet they're able to make you forget that it's a ripoff and instead implant that chorus right into your brain.

As someone who appreciates the hard more than the pop, I have to grudgingly conclude that A Day to Remember is actually at their best when they take the melodic approach. There are too many moments on Homesick where the heaviness and the hardcore feel out of place, especially in the pre-breakdown pit-call of "Mr. Highway's Thinking About the End," where McKinnon orders you to "Disrespect your surroundings." This sounds like dangerous advice, not just when at a show, but also if you're in a children's hospital or your grandma's house. Vincent Bennett of the Acacia Strain shows up in "Welcome to the Family" to bring the vocal mosh, and that he does, but even then the point is lost.

A Day to Remember will continue their success, and rightfully so. Ultimately, musical creativity and underground cred mean nothing, dwarfed in the larger picture by a band's drive to craft music that people like. These guys have struck gold, and when you strike gold, you have to keep mining until it's bare. Keep those hardhats on, boys. You'll need them.