06) Better Off This Way
07) All Signs Point to Lauderdale 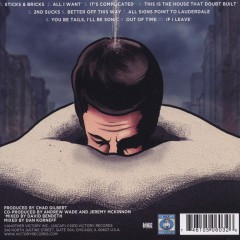 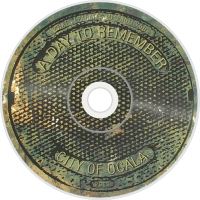 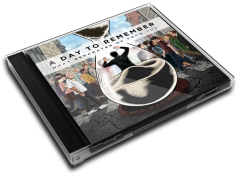 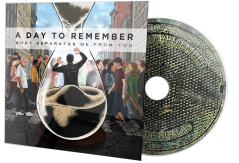 What Separates Me from You is the fourth studio album by American metalcore and pop punk band A Day to Remember. Originally planned for release in October 2010, the album was delayed until November 2010. It featured a greater use of clean vocals and more of a pop punk style than the band's previous releases.The album, which was recorded at Wade Studios in Ocala, Florida, from May to July 2010, featured the band's new guitarist, Kevin Skaff.

What Separates Me from You was met with critical success, with critics praising the album's sound. The band toured worldwide in support of the release.

Album Review
Maybe A Day To Remember's latest, What Separates Me From You, will be the album when all the haters finally quit hating. For now, though, it's really good that they haven't: ADTR work best angry.

There's a spot about midway through “Sticks & Bricks,” the pummeling opening track, when singer Jeremy McKinnon professes, “My heart is filled with hate.” (Right around when you'd expect him to grunt, “Disrespect your surroundings.”) The vitriolic delivery seems sincere, but even if you don't buy into all of the personal/emotional factors underpinning Separates (smack-talking the smack-talkers/a recent, devastating breakup/assorted perils of touring), the album simply kills. If McKinnon wants to blame it all on other bands who won't bro-down with him, or girlfriends who've bailed, just thank the guy, and go back to breaking furniture.

Now four full-lengths into ADTR's career, what's most impressive about Separates is the evolution it marks. One of the key players in the burgeoning popcore scene, the Ocala, Florida-based five-piece—who also include guitarists Neil Westfall and Kevin Skaff, bassist Josh Woodard and drummer Alex Shelnutt—push their love of extremes to new heights on Separates, getting full-on medieval for the heavy parts, contrasted with the most melodic work they've done. Everything is bigger, whether it's the hooks or the breakdowns, and instead of clouding the band's appeal, it's only intensified it. Both pit fiends and pop-punks can find something on Separates to get their hearts racing, if not everything.

There may not be one single standalone cut on Separates that shines to the degree of Homesick's “The Downfall Of Us All,” but the new album is arguably the more evenly stacked of the two; it's practically filler-free. After setting the breakneck pace from the get-go, Separates hits a high-water mark three tracks in with “It's Complicated,” a hyper-fusion of New Found Glory and Four Year Strong, with a syncopated verse recalling the Used's “Taste Of Ink”; next up is the even more impressive “This Is The House That Doubt Built,” arguably the best track. The song, reminiscent of My Chemical Romance's brilliant “Helena,” shifts seamlessly between dark, brooding opening chords and gigantic choruses, with a real melodic bridge—not just a brutal breakdown. ADTR have grown further as songwriters and Separates is their auditory canvas; with the help of the production “dream team” of NFG guitarist Chad Gilbert, longtime collaborator Andrew Wade and ex-guitarist Tom Denney, the band use every second of the album's 10 tracks to proclaim that popcore's heavyweight belt currently resides in Ocala.

McKinnon & Co. maintain the record's locomotive-like momentum to its end—the album's last four songs rival any that precede them. “All Signs Point To Lauderdale” plays like a triumphant sequel to Homesick's “NJ Legion Iced Tea,” complete with huge gang vocals; “You Be Tails, I'll Be Sonic” is the band's best fusion of pop and heavy within the space of a single song yet, and closers “Out Of Time” and “If I Leave” bravely steer into almost pure pop-punk territory, yet win by knockout. The former of the two actually finds drummer Shelnutt laying down a bona fide backbeat in addition to the requisite double-bass rolls, while the latter song is the closest the band have ever come to mirroring fellow South Floridians NFG, one of their key inspirations.

Perhaps there will always be haters, and the hated, for McKinnon to shout at—the more a band succeed, the more rancor is usually aimed their way—but there's never been an A Day To Remember album with as much potential widespread appeal as What Separates Me From You. Whether it's crafting a pop-punk anthem or delivering a sonic beatdown, ADTR do it better than most everyone, and for the rest of us, that's where the separation lies.