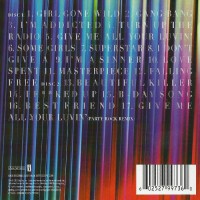 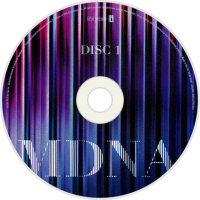 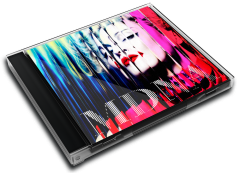 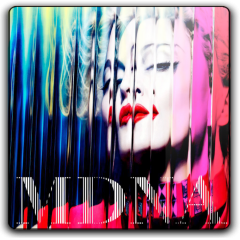 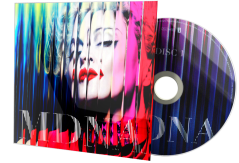 MDNA is the twelfth studio album by American recording artist Madonna, first released on March 23, 2012 by Interscope Records. It is also Madonna's first album not to be associated with Warner Bros. Records, the label she was signed to since 1982. As well as Madonna producing the album she worked with a variety of producers such as Alle Benassi, Benny Benassi, Demolition Crew, Free School, Michael Malih, Indiigo, William Orbit, Martin Solveig.
The album received generally positive reviews from music critics. Upon its release, it debuted at number one in many countries worldwide, including Australia, Canada, Italy, Spain, the United Kingdom and the United States. Madonna set a new record for the most number-one albums by a solo artist in Australia and the United Kingdom, but also achieved the largest second-week percentage sales drop for a number-one debuting album of the Nielsen SoundScan era in the United States.
The album's lead single, "Give Me All Your Luvin'", was released on February 3, 2012. The single became her 38th top-ten hit on the Billboard Hot 100, extending her record as the artist with most top-ten singles in that chart's history. The second single "Girl Gone Wild" was released digitally on March 2, 2012. "Turn Up the Radio" has been confirmed to be the third single from the album. Prior to the album's release, Madonna performed at the Super Bowl XLVI Halftime Show on February 4, 2012. The album is promoted by her MDNA Tour.

User Album Review
Madonna is judged to a higher standard than the common or garden songbird. When you've sold 300 million records, racked up enough hits to omit Deeper and Deeper from your two-CD greatest hits set, and generally become the sort of pop culture colossus who can publish a book featuring a photo of yourself hang-gliding naked, well, people just expect more.
Which is why the opening song on her 12th studio album is so disheartening. It's a fairly charmless genero-banger called Girls Gone Wild on which this 53-year-old mother-of-four trills: "You got me in the zone / DJ play my favourite song."
MDNA picks up as soon as it finishes, but it's never the most innovative or sonically adventurous Madonna LP. Featuring production from French DJ Martin Solveig, house maestro Benny Benassi and Madge veteran William Orbit, it sounds contemporary(ish) rather than cutting edge. Nor is it a cohesive artistic statement like 1998's Ray of Light. At times, Madonna seems to be using her lyrics to teach her kids the meaning of the word clichÃ©. If she's not "a fish out of water", she's "a bat out of hell" or "a moth to a flame"”¦ Got it now, Rocco?
However, there's no denying MDNA delivers thrills. In true Ciccone fashion, club pop pounders like Some Girls, Love Spent and Turn Up the Radio seem to push a bit harder than the competition ”“ that last one's got a drop like an open manhole. MDNA also has something the last two Madge albums lacked: ballads, both of which are quite lovely.
Best of all, several moments prompt a welcome sigh: "God, only Madonna". Gang Bang is a preposterous piece of pop schlock featuring gangster film sound effects and the old girl gunning ”“ quite literally ”“ for revenge. I Don't Give A has Madge rapping and ribbing herself in the process: "Ride my horse, break some bones / Take it down a semitone." I'm Addicted climaxes with a pulse-quickening "M-D-N-A" chant; when they're old enough, it'll define ‘iconoclastic’ to her brood.
The result? It's got its faults, but MDNA isn't just a good pop album, it's a good Madonna album too.