05) Never Let Me Down Again

09) Only When I Lose Myself 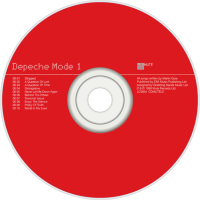 The Singles 86-98 is a singles compilation album released in 1998 by Depeche Mode. It was released as a follow-up to the band's previous compilation, The Singles 81→85, which was also re-released in the same year. The compilation covers the band's 7-inch single releases spanning five studio albums (from 1986's Black Celebration to 1997's Ultra), as well as including the band's 1998 stand-alone single "Only When I Lose Myself". Also included is "Little 15" (from Music for the Masses, released as a single in Europe), and the live version of "Everything Counts" (from the live album 101) which was released as a single in 1989. All tracks on The Singles 86-98 were newly remastered, as was the case with the re-release of The Singles 81-85.
The four-month Singles Tour that followed marked the first time Depeche Mode had toured since the 1993–94 Devotional/Exotic Tour. (They had declined to tour Ultra a year earlier, playing only a few songs at a handful of shows instead.)
The Singles 86-98 has sold 500,000 units in the U.S. (double albums count as two units), achieving Platinum certification. This album was also listed in Blender magazine's 500 CDs You Must Own.