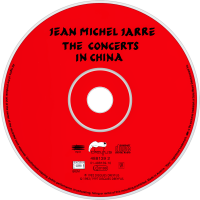 The Concerts in China (French title: Les Concerts en Chine) is a live album by Jean Michel Jarre, recorded in 1981 and released in 1982 on Disques Dreyfus. It was recorded during Jarre's Concerts in China tour of Autumn 1981, which consisted of five Peking and Shanghai concerts in China; this was the first time a Western pop artist performed in China after the Cultural Revolution.

The album is a balance of previously released tracks by Jarre, new compositions inspired by Chinese culture, and one rearranged traditional Chinese track ("Fishing Junks at Sunset"). The music is combined live and studio work, plus ambient sound recordings. The most live tracks are the Equinoxe and Magnetic Fields sets. New compositions include "Night in Shanghai", "Laser Harp", "Arpegiator", "Orient Express" and "Souvenir of China". "Fishing Junks at Sunset" is a new arrangement of a very old traditional Chinese song known as the "Fisherman's Chant at Dusk" which was performed and recorded with The Peking Conservatoire Symphony Orchestra, and is often wrongly attributed as being composed by Jean Michel Jarre, misled by the album inlay.

The album was originally released as a double-disc LP, then as a double-disc CD. There was also a CD release in two separate volumes, with the cover color changed to blue (Vol. 1) and yellow (Vol. 2). In 1997, a one-disc remastered CD was released, made possible by an extended running time of 78:17 minutes and by reducing the gaps and audience noise between tracks.

One of the album's original tracks – "Arpegiator" – was used in the soundtrack of the cult film 9½ Weeks.

The Concerts in China's opening track "The Overture" is in fact the first movement of "Magnetic Fields Part 1" slowed down.

The album reached #6 in the UK charts and #1 in Portugal.