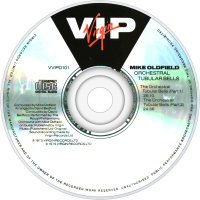 The Orchestral Tubular Bells is an orchestral version of Mike Oldfield's album Tubular Bells, arranged by David Bedford and recorded in 1974 by the Royal Philharmonic Orchestra, featuring Oldfield himself playing the guitar. In 2000 it was reissued by Virgin as a HDCD.
Excerpts from the album were featured in the 1979 NASA film, The Space Movie. It peaked at #17 on the UK Albums Chart in 1975.