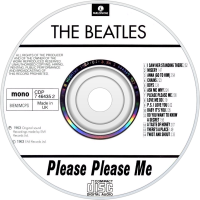 Please Please Me is the debut album by English rock band The Beatles. Parlophone rush-released the album on 22 March 1963 in the United Kingdom to capitalise on the success of singles "Please Please Me" (No.1 on most lists but only No. 2 on Record Retailer) and "Love Me Do" (No.17).

Of the album's fourteen songs, eight were written by Lennon-McCartney (originally credited "McCartney-Lennon"), early evidence of what Rolling Stone later called "[their invention of] the idea of the self-contained rock band, writing their own hits and playing their own instruments". In 2012, Please Please Me was voted 39th on Rolling Stone magazine's list of the "500 Greatest Albums of All Time".

In order for the album to contain fourteen songs (the norm for British 12" vinyl pop albums at that time was to have seven songs on each side, while American albums usually had only five or six songs per side) ten more tracks were needed to add to the four sides of their first two singles recorded and released previously. Therefore, at 10:00 am on Monday, 11 February 1963, The Beatles and George Martin started recording what was essentially their live act in 1963, and finished 585 minutes later (9 hours and 45 minutes). In three sessions that day (each lasting approximately three hours) they produced an authentic representation of the band's Cavern Club-era sound, as there were very few overdubs and edits. Optimistically, only two sessions were originally booked by Martin-the evening session was added later. Martin initially contemplated recording the album live at the Cavern in front of the group's home audience and visited the Liverpool club on 9 December 1962 to consider the technicalities. But when time constraints intervened, he decided to book them at EMI Studios in Abbey Road instead and record them virtually live. Martin said, "It was a straightforward performance of their stage repertoire - a broadcast, more or less."