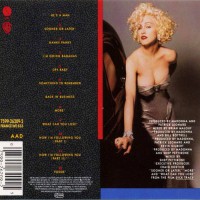 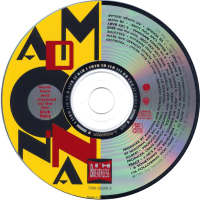 I'm Breathless: Music from and Inspired by the Film Dick Tracy is a soundtrack album by American singer-songwriter Madonna. It was released on May 22, 1990, by Sire Records to promote and accompany the film Dick Tracy, released in the summer of 1990.

The album is an eclectic mix of soundtrack numbers and songs inspired by the film. The album, musically, consists predominantly of Broadway showtune-flavoured jazz, swing and big band tracks inspired by the music of the 1940s; despite this, however, there are traces of contemporary pop music within the album, including the final song, "Vogue", which is a dance-pop track with a house beat and disco influences. The album contains "Sooner or Later", a jazz song from the film composed by Stephen Sondheim which went on to win the Academy Award for Best Original Song at the 1991 awards. Overall, the album received a mixed reception from music critics; reviewers applauded Stephen Sondheim numbers, as well as the final track "Vogue", and Madonna's vocals were praised; however, some deemed the non-film songs to be of little value. The album was commercially successful; it reached the top ten in the US as well as in several other countries. The Recording Industry Association of America (RIAA) certified it Gold, Platinum and 2x Platinum on July 30, 1990, denoting two million shipments in the United States and has sold more than 7 million copies worldwide.

The album spawned two singles. The first, "Vogue", was one of Madonna's most successful and one of the world's best-selling singles, having sold over 6 million copies globally, and reaching number one in over 30 countries. It was also critically acclaimed, featuring in several critic lists, and it has been deemed an influential song, considered to have helped bring house into mainstream American popular music. The video was also successful, helping bring vogueing into mainstream popularity. The next single, "Hanky Panky", also did well commercially, reaching the top ten in the US and the UK; the song was noted by critics for its double entendres and innuendos.

In support of both I'm Breathless and her previous album, Like a Prayer, Madonna embarked on her Blond Ambition World Tour; the concert tour was critically acclaimed, winning an award at the 1990 Pollstar Concert Industry Awards; despite this, however, it was controversial for its sexual content as well as its usage of Catholic imagery, leading Pope John Paul II to call for a boycott, with one of Madonna's concerts in Italy being cancelled. Madonna has performed songs from the album in numerous occasions; Madonna performed "Sooner or Later" at the 1991 Oscar Awards wearing a dress inspired by American actress Marilyn Monroe, and it was deemed the seventh "most awesome" Academy Award performance by Billboard. Madonna also performed "Vogue" at the 1990 MTV Video Music Awards, wearing 18th century Marie Antoinette-inspired clothes alongside her dancers. Madonna has performed "Vogue" on four of her concert tours.