Track List
01) Introducing the Band
02) We Are the Pigs 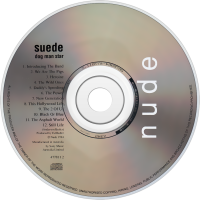 Dog Man Star is the second album by English alternative rock band Suede, released in October 1994 on Nude Records. It was the last Suede album to feature guitarist Bernard Butler, due to growing tensions between Butler and singer Brett Anderson ending with Butler leaving the band before the album was completed. Dog Man Star is more downbeat than their debut and chronicles Suede as they parted from the "Britpop pack".
Although it did not sell on the same scale as their chart-topping debut Suede (1993), Dog Man Star reached number three on the UK Albums Chart. Released to an enthusiastic critical reception, it is considered by many to be Suede's masterpiece.
In early 1994, when Suede were about to release the standalone single "Stay Together"-their highest charting single, which reached number three on the UK Singles Chart-the morale within the group was at an all time low. Butler's father had died just as the band were about to begin their second American tour. The first week of the tour was cancelled, and Suede flew back to London from New York. When the tour did resume, Butler distanced himself from the rest of the band far more than before. Recently bereaved and engaged, according to Butler, "they got really resentful of the fact that they were on tour with someone who didn't want to party". He even travelled separately, either alone, by taxi, or on the tour bus of support act The Cranberries. Then in Atlanta, Suede suffered the ignominy of having to open for The Cranberries, who'd been given a friendlier reception than the headliners and received the support from MTV as well. By New York they'd had enough and the last few dates were cancelled. According to drummer Simon Gilbert, Butler was becoming unworkable and intolerable, and the band could not function together any longer.
To record Suede's next album Anderson moved to Highgate, and began to write lyrics influenced by heavy drugs while living in a secluded Victorian mansion. "I deliberately isolated myself, that was the idea," Anderson later explained. The album was later described by one journalist as "the most pompous, overblown British rock record of the decade", which Anderson puts down to his use of psychedelic drugs. "I was doing an awful lot of acid at the time, and I think it was this that gave us the confidence to push boundaries." Anderson has said that he thrived on the surreal environment he lived in at the time; next door were a sect known as the Mennonites, who would often sing hymns during Anderson's drug binges.

Album Review
After the party ”“ the hangover: One year on from the louche-but-rocking debut, Suede had begun to irrevocably fracture at their very core. Luckily, out of such travails are great works of art born.
By this point the chemistry (in all senses) was becoming a little strained. Retreating into a drug-assisted solitude, Brett Anderson’s lyrics were less concerned with the politics of modern love and more with the effects of the morning after. Solitude, paranoia and self-loathing were the themes here. When he sings ‘If you stay we’ll be the wild ones”¦’ it’s with a quiet desperation that’s clinging to a lifestyle that’s gone horribly wrong.
The downbeat mood pervades everything here. Even on peppier rockers like “The Hollywood Life” or “New Generation” the guitars of Bernard Butler here sound more spiteful, suffused with a vicious metallic edge. It was here that they formerly parted from the Britpop pack as well (‘I don’t care for the UK tonight’ sings Brett on “Black And Blue”).
At the heart of this album is the real-life drama of Anderson’s and Butler’s increasing alienation. Before the album had even been mixed the pair, once touted as a Lennon and McCartney for the post-E generation, had split. Butler subsequently told of how he turned up to the studio one day to find all his equipment outside the locked door.
Yet, while Dog Man Star stands as a testament to the destructive power of thrill-seeking love and ego-bloating drugs it remains a far deeper and sonically adventurous ride than its predecessor. There’s still a huge dollop of Scott Walker-meets-Bowie-in-the-streets-of-Soho-at-5-in-the-morning archness that can grate. And Anderson’s melodrama can be slightly over-egged on tracks like “The 2 Of Us”, yet with its reverb-drenched lushness and fabulously melancholy audio verite ambience (virtually every track is prefaced by or marbled with some low-key moodiness that recalls Talk Talk’s golden period) it’s an album that continues to fascinate and reward: It’s possibly their least dated work.
While the band struggled heroically (and succeeded) to consolidate their success after Butler’s departure the legend of the band’s lost potential really stems from Dog Man Star. Never had misery sounded so alluring, reaching out to all the lonely urbanites that ever woke up alone. For this alone it remains timeless.