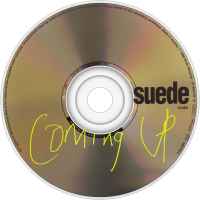 Coming Up is the third album by English alternative rock band Suede, released in September 1996 on Nude Records. It was the band's first album since the departure of guitarist Bernard Butler, who was replaced by Richard Oakes. Also added to the band was keyboardist Neil Codling. The album was nominated for the 1997 Mercury Prize. A commercial and critical success, Coming Up was the album that introduced Suede to a worldwide audience, in places such as Europe, Canada and Asia.
After the departure of guitarist Bernard Butler and the lack of commercial success with Dog Man Star and its singles, Suede were being somewhat dismissed by the British music press. Determined to bring Suede back into the mainstream, Anderson decided that the sound of the new album would be the complete opposite of Dog Man Star. "I think the next album will be quite simple, actually. I'd really like to write a straightforward pop album. Just ten hits."
The guitarist to replace Butler was the 17-year-old Richard Oakes, who beat 500 other applicants for the role. Instead of applying for the job like everyone else, Oakes was auditioned on the strength of an impromptu demo tape he sent to the Suede fan club. Despite Oakes's smooth integration into his new role and the band's rejuvenated spirit, Anderson was tired of touring and was keen to get back in the studio with his new songwriting partner. "...it was becoming really not much fun touring an album that wasn't made by the band." This statement was an indication that Suede lacked enthusiasm, and were not content with being on tour, a feeling, which was reflected in the b-side, "Have You Ever Been This Low".
To prepare for its recording, the band had immersed themselves in T. Rex's 1972 album The Slider and its successor, Tanx. On the eve of the album's release, Anderson stated: "I wanted it to be a complete turnover from the last album, which was very dark and dank... I wanted it to be communicative and understandable. Pop music generally has to be pretty dumb, I think. And I've had my little affair with the avant-garde. It's not as exciting as pop music." Long-time producer Ed Buller would be at the controls once again. Bass player Mat Osman recalls how Buller was keen on making the album simple. "He was really keen on using all those devices: the big repeated end, the handclaps, the straightforward chorus, make it big and obvious."
Two songs which made it onto Coming Up had already been written in the early days of Suede. "Lazy" and "By the Sea" were two of Anderson's compositions, which had been written during the Butler era. "I pretty much knew Bernard wasn't going to be in Suede for the rest of his life and I thought it would be good to have a couple of things knocking about." "By the Sea" was actually written when Suede were recording their first album, which is why the songs opening line is almost identical to "So Young".
Unlike the tense and chaotic recording of Dog Man Star, which according to Anderson was written by post, the new material was far more celebratory in both its development and execution. "I kind of like working like that, because the whole of Dog Man Star was written by post pretty much,...There was no mutual exchange or anything like that." Songs such as "By the Sea" and "She" required the use of keyboards. Faced with the problem as to how to play them live, Suede recruited Simon Gilbert's cousin Neil Codling, who made his debut at a fanclub gig in January 1996.
The musical sound of Coming Up is more accessible than previous album Dog Man Star. Its singles were much more successful than those of their second LP, while the lyrical content concerns the band's disaffection at the mid-90s hedonistic, celebrity-obsessed culture; "Beautiful Ones" and "She" are caricatures of British yuppies, celebrities and heroin-chic models. "Beautiful Ones" was originally titled "Dead Leg" after Osman threatened to give Oakes a dead leg if he was unable to write a top ten single. According to Anderson, "The Chemistry Between Us" is about "the emptiness of it all" with regards to drug use. The album finishes with a note of optimism in "Saturday Night" - a straightforward, contented love song.

Album Review
"Pick a fight with Suede, you gonna pick a fight with the Suede fanbase," warned Matt Lucas on Shooting Stars in 1997. Leave aside the fact that Lucas was then dressed as a menacing man-baby: the truly surreal thing about this pop culture nugget is its target. Suede, suburbia’s moodiest, druggiest misfits, were now so mainstream-famous that they could be knowingly mocked on primetime, thanks to their biggest album yet, the hit-rammed, melody-overloaded Coming Up.
Fifteen years later, it seems obvious that Britpop’s John the Baptists would rise from the grave to claim some of the rewards being lavished on lesser lights like Kula Shaker and Shed Seven, but it wasn't at the time. Despite their punchy 1993 debut generating a whirlwind of hype, the loss of wunderkind guitarist Bernard Butler and the sprawling darkness of 1994’s subsequent Dog Man Star read like a two-part commercial suicide note. Replacing Butler with a teenage fanboy and the drummer’s cousin was hardly encouraging.
Yet amongst the B sides, lost songs and demos lovingly collected in this third lavish re-issue from the Suede back catalogue (the compilers clearly taking Matt Lucas’ threat seriously) lies the first clue that everything was about to go magically right. Together, a 1994 B side, was the first collaboration between Brett Anderson and new guitarist, Richard Oakes: its shamelessly poppy ebullience, fizzy guitars and breezy bubblegum vocal created a blueprint for the album which followed.
And what a dazzling, spangly pop album Coming Up, remains, made shinier still by expert remastering. Anderson cites the surging outsiders anthem Trash as the pinnacle, but Beautiful Ones is more remarkable, the urgent, knotty wordplay of its verses giving way to an ecstatic chorus which embodies the album's title (the demo fascinatingly reveals that the song began life as Beatles-y whimsy). That these big pop beasts were interspersed with savage melodramas like She and swooning love songs like Picnic by the Motorway made Coming Up more alluring and enduring.
In retrospect, the seeds of the band's later decline were also planted here. The blandly anthemic Saturday Night paved the way for later FM fluff, while the B sides soon plummeted from air-punching (Every Monday Morning Comes) to scab-scratching (These Are the Sad Songs). But let’s dwell on Suede's sad decay when their last two albums are re-issued: for now, this fan-dream edition of Coming Up captures a band that still seemed capable of anything.