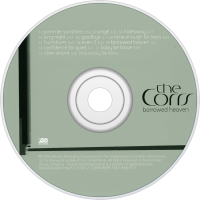 Borrowed Heaven is the fourth studio album by Irish Celtic folk-rock band The Corrs, released through Atlantic Records on 31 May 2004. The album was produced by Olle Romo. Sharon Corr managed to write and play and make a significant contribution with songs such as "Hideaway," "Long Night," and "Goodbye." The Corrs created a folkier, edgier, and more guitar-oriented album than their previous work, In Blue (2000), mostly due to the fact that Jim Corr plays most of the guitars and keyboards. Reviews for this album varied greatly. Fans of the band generally agree the album represents a return of sorts to the group's Celtic folk pop origins after the much 'poppier' In Blue released in 2000.
The band released three singles from this album: "Summer Sunshine," "Angel," and "Long Night." A remix version of "Goodbye" was released as a download-only single in 2006. Other notable tracks include the title track "Borrowed Heaven," which featured an appearance from Ladysmith Black Mambazo, and "Time Enough For Tears," which was penned by U2's Bono.