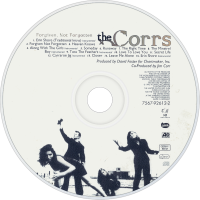 Forgiven, Not Forgotten is the debut album by Irish folk rock group The Corrs. It was released by Atlantic Records on 26 September 1995 across the world. The album was primarily produced by David Foster, with additional production by Jim Corr. In January 1997, a special tour edition of the album was released in Australia and New Zealand and featured a bonus disc containing live and rare tracks which were recorded from their Forgiven, Not Forgotten World Tour.
The title track and the band was featured in an episode of Beverly Hills, 90210 called "Turn Back the Clock". The band performed the song at a New Year's Eve party at the Peach Pit After Dark.