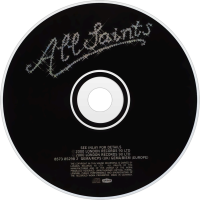 Saints & Sinners is the second studio album by British vocal group All Saints. It was released three years after their debut album, All Saints, and featured the hit singles, "Pure Shores" (UK #1), "Black Coffee" (UK #1) and "All Hooked Up" (UK #7). Promo copies of the track "Surrender" were circulating from early January 2001, indicating it would have been the fourth proper single from the album had the group not disbanded soon after the album's release. The album charted at #1 in the UK, their only album to do so. Three tracks on the album were produced by William Orbit, best known for his work with Madonna on her Ray of Light album. The album received mixed reviews from music critics, praising the singles and the new direction of music, while some felt it was too similar to the Spice Girls and Madonna's album Ray of Light.
The first single from the album, the Orbit-produced "Pure Shores", preceded the album by several months, having been previously released on the soundtrack for the film The Beach. The majority of the songs were written by Shaznay Lewis and Karl Gordon. Melanie Blatt wrote two tracks on the album, "I Feel You" and "Ha Ha", the former track being written in dedication to her daughter, while Natalie Appleton co-wrote the track "Dreams" with Samantha Fox. Fox said she is credited on the song as "Karen Wilkin" because All Saints refused to record the song if she used her real name. Commercially, Saints & Sinners wasn't as successful as its proceeded album.