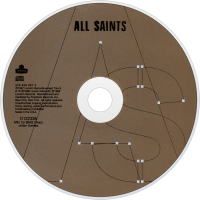 All Saints is the debut studio album by British girl band All Saints. It was released on November, 24 1997 by London Records. All Saints worked with several producers on the album; mainly Cameron McVey, John Benson, Johnny Douglas, Karl "K-Gee" Gordon, Magnus Fiennes, Nellee Hooper, Karen Gibbs and Neville Henry. Musically, the album drew inspiration from electronic, hip hop, R&B, swing, synthpop, trip-hop and UK garage music.
Upon its release, the album received mixed reviews from music critics, where many critics praised the choice of singles and the groups musical direction, while some didn't enjoy the music direction and felt they lacked personality. The album spawned three number-one singles in the United Kingdom: "Never Ever", "Under the Bridge" / "Lady Marmalade", and "Bootie Call", as well as "I Know Where It's At" (#4) and "War of Nerves" (#7). The album proved to be a commercial success worldwide, and became a hit success in the United States, receiving platinum in that country.