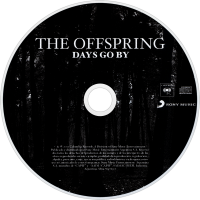 Days Go By is the ninth studio album by American punk rock band The Offspring, released on June 26, 2012 on Columbia. Produced by Bob Rock, the album is the band's first to feature drummer Pete Parada, who joined the band a year prior to the release of Rise and Fall, Rage and Grace (2008). The drum tracks were also recorded by session musician Josh Freese, who provided the same role on the band's previous two albums.
The Offspring commenced work on Days Go By in 2009, with plans to release it in 2010. However, its release was pushed back several times while the band continued touring and writing new material. The writing and recording process spanned three years and six recording studios (four in California, one in Hawaii and one in Canada) and was finished in March 2012. During the recording sessions, The Offspring re-recorded "Dirty Magic" (from their 1992 album Ignition), which serves as the album's ninth track.
Days Go By's lead single and title track was premiered on radio stations on April 27, 2012, and was released to digital outlets. "Cruising California (Bumpin' in My Trunk)" was the first single from the album worldwide (except for the United States, Canada, Germany, Austria and Switzerland), and was released on April 30, 2012. The album debuted at #12 on the Billboard 200 with first week sales of 24,000 in North America.