Rise and Fall, Rage and Grace 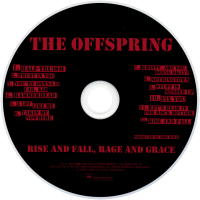 Rise and Fall, Rage and Grace is the eighth studio album by American punk rock band The Offspring, released on June 17, 2008 in the United States and a week earlier in Japan. It was their first album of new material in nearly five years, following 2003's Splinter, and their first to be produced by Bob Rock.
The span of nearly five years between Splinter and Rise and Fall, Rage and Grace was the longest gap between studio albums in The Offspring's career. The band had been working on new material since the fall of 2004, but showed no further signs of progress until November 2006, when they announced on their official website that they had begun recording with producer Bob Rock. The album was supposed to be released in 2007, but kept getting pushed back. The writing and recording process, spanning four years and three recording studios, was finally finished in April 2008. It produced four singles: "Hammerhead", "You're Gonna Go Far, Kid", "Kristy, Are You Doing Okay?" and "Half-Truism". Although a video was made for "Stuff Is Messed Up", it was never officially released as a single, but saw regular radio play on popular stations such as Southern California's KROQ.
Although drummer Atom Willard (who left in July 2007) was still a member of the band during the recording, session musician Josh Freese actually handled the drum tracks, like he did on Splinter. Due to contract issues with Geffen Records, Willard was not permitted to do recording on the album and later decided to leave the band and continue his duties in Angels & Airwaves full-time while former Face to Face drummer Pete Parada joined the band just in time for the tour.