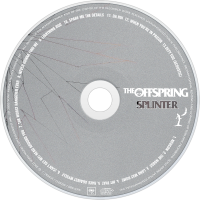 Splinter is the seventh studio album by American punk rock band The Offspring, released on December 9, 2003. It was the first album the band released without drummer Ron Welty and also the first to have a Parental Advisory label on some album covers, even though many of their previous albums contain profanity.
Although not as successful as The Offspring's albums between Smash and Conspiracy of One, Splinter received gold certification two months after its release. The album received average reviews, but still sold reasonably well. It debuted at 30 on the U.S. Billboard 200 with around 87,000 copies sold in its first week. "Hit That" and "(Can't Get My) Head Around You" were the only two singles to accompany this album. "Spare Me the Details" was also released as a single, but charted only in New Zealand.