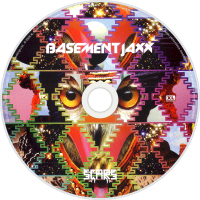 Scars is the fifth studio album by British electronic dance music duo Basement Jaxx, released on 21 September 2009. It was preceded by the first single "Raindrops", released on 21 June, while the second single, "Feelings Gone", was also released in the United Kingdom on 21 September. The track "Twerk" features lyrics adapted from Michael Sembello's song "Maniac".

In an interview, Felix Buxton stated that the album Scars were all the things that the band had been through emotionally and physically. Felix told Rolling Stone Australia they named the album 'Scars' after he was mugged for his bicycle in Brixton, London in 2008. He revealed: "I wasn't badly hurt but it scared me. It's probably one of the scariest moments of my life. Scars are the things that stay with you and that incident definitely gave me one."

User Album Review
Since the release of hectic breakout single Red Alert ten years ago, Basement Jaxx have made albums full of innovative, effervescent dance anthems, typically featuring astutely chosen vocal collaborations.
While these gleeful hits have greatly cheered both clubbers and chart-followers, production pair Felix Buxton and Simon Ratcliffe make plenty of twisted and mischievous music that never reaches radio: Get Me Off, from 2001’s Rooty album, and the oft-overlooked I Live in Camberwell, which features on the bonus disc to their 2005 singles compilation, are as malevolent as they are funky.
As the Brixton-formed duo suggest with this album’s title, Scars inhabits darker territory than 2006’s Crazy Itch Radio and their three preceding long-players. Lead single Raindrops aside, there aren’t many moments of carefree, bubbly abandon. In fact, even Raindrops opens with odd, psychedelic loops, seemingly pinched from School of Seven Bells. Then the tune turns into a crucial, if disorientating, blend of funk, garage and electro-tinged carnival house, almost like it’s been made up on the spot.
Dev Hynes, aka emotive indie stalwart Lightspeed Champion, crops up for some inspired melancholy on My Turn. His yearning lilt and delicate acoustic guitar is accompanied by a formidably dense bassline and percussion which sounds like the nocturnal twitching of agitated crickets. Elsewhere, Twerk sounds like a fierce sister of 1999 single Jump N’ Shout, with Slarta John’s roughneck spitting supplanted by Tampa-based female rap duo Yo! Majesty’s digi-dancehall fury.
Scars is testament, again, to Basement Jaxx’s resolute confidence. From the title track’s harnessing of Kelis and post-Timbaland production to the extraordinary Day of the Sunflowers (We March On), where Yoko Ono sings about “20,000 fishes coming down from the sky,” before simulating sexual excitement, no challenge is shirked. Alas, the fearlessness proves problematic come the final pairing of the underwhelming D.I.S.tractionz and Gimme Somethin’ True, the latter being merely a Carlos Santana-flavoured retread of 1999 hit Rendez-Vu. Pruning the album could have paid dividends.
Thankfully, said lapse can’t ruin what is a frantic, surprising and addictive album. If Basement Jaxx can keep making records of this exceptional standard they’ll rightly be rewarded with another decade of dance success.