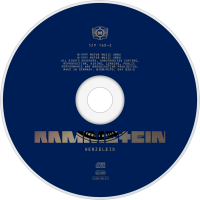 Herzeleid (dated German for "Heartache") is the debut album by German Neue Deutsche Härte band Rammstein. It was released on 29 September 1995. The album's original cover depicted the bandmembers' upper bodies without clothing. This caused critics to accuse the band of trying to sell themselves as "poster boys for the master race." The songs "Heirate Mich" and "Rammstein" are featured in David Lynch's film Lost Highway. The direct translation of "Herzeleid" is "Heartache"; however, according to an interview on Talking Metal's podcast in 2007, Richard Kruspe stated that it doesn't translate to "Heartache", but in the German language, it simply means "Heartbreak". The album is a culmination of the relationship troubles of all but one of the six band members, hence the title "Herzeleid".