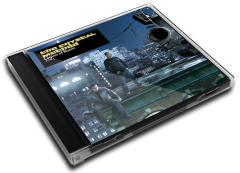 Legion of Boom is the third official studio album by the American band The Crystal Method. The album is a mixture of different genres, like the rough "True Grit", to the wiry guitar rock song "Born Too Slow". Legion of Boom contains vocals from actress Milla Jovovich and Kyuss lead singer John Garcia. The album also contains guitar riffs courtesy of Limp Bizkit guitarist Wes Borland (who also co-produced three tracks) and vocal talents by beatboxer Rahzel. Its title is likely a reference to the supervillain team Legion of Doom.

An edited version of "Born Too Slow" was featured in the soundtrack for the video games Need for Speed: Underground and Donkey Konga 2. The song "I Know It's You" was used in the pilot episode of the TV show Numb3rs. Also, the song "Bound Too Long" was featured on the soundtrack to the movie Cursed, and "Starting Over" was used in an episode of the TV show Alias and an episode of CSI: Crime Scene Investigation. A different version of "Weapons of Mass Distortion", renamed "Weapons of Mad Distortion", was used in the movie Blade: Trinity.
The design of the album is not completely standard. As opposed to most album layouts, the tracks of Legion were listed on the front of the case, rather than on the back, with the album art placed on the back inlay.

This album also contains the only known time either members of The Crystal Method have provided vocals for a song. The song that features this is "I Know It's You", which has Ken Jordan of TCM singing through a vocoder.

The album was nominated for a Grammy in the "Best Electronica/Dance Album" category in 2005, the first year that any award was given out for that category