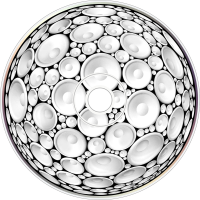 The album was nominated at the 52nd Grammy Awards for Best Electronic/Dance Album.

After their album Legion of Boom was released, Ken Jordan and Scott Kirkland decided to move into their new, state-of-the-art recording studio, called Crystalwerks. The time taken to prepare the new studio resulted in the loss of production time on the album, which is why it has taken so long to come out. They have also taken the time to bring in many guest artists to be featured on the album.

In early August 2008, The Crystal Method revealed their plans for the album. Though the album was planned to release by the end of summer, the release date was pushed back to early 2009. They then released a free song on their website, which was a remix of their first single, "Now is the Time". The remix features samples of a Barack Obama speech, and is called "Now is the Time (Vote '08 Remix)". The Crystal Method was asked if "Now Is the Time (Vote '08 Remix)" would be on Divided by Night. They replied "maybe, just as a bonus track", though it has been confirmed that the song will not be on the new album according to the track listing, which was released in mid February 2009.
In October 2008, they released a series of tour dates for a DJ set tour across North America, which went further into the year, finishing on New Year's Eve, 2008. They would play some of the music off of their new album to support the tour.

In December 2008, they set up a remix contest for the song "Double Down Under" on the new album, and released the name of the lead single, "Drown in the Now", which features vocals by Matisyahu.