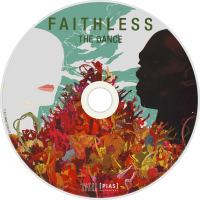 The Dance is the sixth and final studio album by dance music act Faithless on their own record label, Nates Tunes, and first for PIAS Recordings. Dido is featured on the songs "North Star" and "Feelin' Good". Actress and singer Mía Maestro performs the vocals on "Love Is My Condition".
The band's common theme for the album was a 'back to their roots' approach, with vocalist Maxi Jazz elaborating that the album was a return to the old, with an eye on the future; "This is probably the danciest album we’ve ever created; it’s like a return to what we did before but more so." Sister Bliss added that the club culture was something the band members, especially her, were stuck with; "Late-night DJing will be the death of me but I’m good at it, goddammit. I’ve always found house music deeply absorbing; it forces you to be in the moment and it’s locked into my DNA. I get riled when dance music gets undervalued as mindless nonsense because there’s a galvanising force in people getting together to do something positive. There’s nothing more joyous than people dancing and losing themselves to music."
"What’s exciting is putting The Dance into context as our sixth album," adds Bliss. "After getting together to do one single, we never thought we’d reach this point. It’s mad, innit? But it’s also very rare that you find a unique voice and when Rollo and me first encountered Maxi, we didn’t want the conversation to end. Our first record, Salva Mea, was very odd for 1990s dance music. The original is like a symphony that goes into hip hop then banging house - it’s all over the bloody shop.

Album Review
On Saul Williams’ eponymous album of 2004, the New York poet-cum-rapper talks of the stagnation of MC skills: “we should not have encouraged them to use cordless microphones, for they have walked too far from the source and are emitting a lesser frequency”. The same can be said of Faithless, who’ve released records to ever-quieter choruses of appreciation since their debut, 1996’s Reverence. If they put out another collection of house-hued electro-pop but nobody’s around to hear it, have they released anything at all?
The Dance ”“ album proper number six ”“ isn’t exactly forward in announcing its arrival, with physical copies available only through Tesco (other shops are available, though this won’t be in them) for the time being, and digital sales exclusive to iTunes (likewise). From a cynical perspective, limiting outlets can be read one of two ways: the band has made two great deals to tide them over ‘til the fantastic fees of festival season, or they’re worried about standing out amongst contemporary dance artists, hopeful instead of spontaneous point-of-sale purchases.
Sadly, it seems (sounds) that the latter reasoning was behind this commercial move taken by Rollo, Sister Bliss and Maxi Jazz ”“ or, more likely, their management, keen to guard against in-store comparisons with more innovative artists vying for the same coinage. Though never revolutionary of design, Faithless’ best material has nonetheless stood the test of time, placing them beside fellow 90s hit-makers Underworld and The Chemical Brothers as well-weathered perennials of the UK dance scene. Unlike said acts, though, Faithless have been unable to significantly expand their palette, excursions beyond a tested dynamic resulting in critical indifference. Reviews of their comparatively downbeat set of 2004, No Roots, weren’t exactly ecstatic, and 2006’s To All New Arrivals fared little better.
So it’s unsurprising that The Dance largely plays to expectations, limited though they are through experience. Diversions from mid-paced fare that fades too easily into the background are rare, but appreciated: Comin Round sounds like Yeasayer given a make-over by Hot Chip, Crazy Bal’Heads dubs itself into a delightful spin, and Flyin Hi’s gentle washes of sound are chill-out perfection. Dido’s turn on Feelin Good is also a highlight, the vocalist sounding better than ever. But too many token gestures ensure any lasting impression is extremely brief. Should they plan another long-player, Faithless would do well to return to their own source in search of the spark that first fired their career into life.