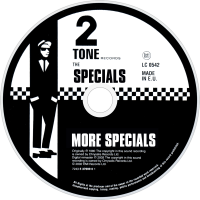 More Specials is an October 1980 (see 1980 in music) album from the ska band The Specials. The album was the band's second, after their self-titled debut, and expanded the group's 2 tone sound to include lounge music and other influences. It includes collaborations with The Go-Go's, Rhoda Dakar from The Bodysnatchers and Lee Jay Thompson from Madness. The lyrics, like the previous album, were often intensely political.
On the charts, the album hit the Top Five in the UK, where "Rat Race", "Stereotype" and "Do Nothing" hit the Top Ten. "Rat Race" hit #89 on Billboard Music Chart's (US) Club Play Singles chart, while the album as a whole hit #98 on Billboards Pop Albums chart.
More Specials was a hit in the two-tone movement, a late-1970s revival of Jamaican ska from the 1960s. Along with bands like the Bodysnatchers and Madness, The Specials would go on to be a leader in this revival, and later heroes for two further ska-punk revivals on the opposite side of the Atlantic: the late 1980s Southern California scene (NOFX, Operation Ivy) and the mid-1990s "third wave of ska" (Sublime, No Doubt) which popularised the mixture in the US.
The Track 'Hey, Little Rich Girl' has been covered by Amy Winehouse.

Album Review
So how does the Specials’ second album sound, nearly thirty years after its first release?
The group had stormed the British charts in 1979 with a brash, high energy brand of pop ska. But on this album keyboardist Jerry Dammers starts to become their production mastermind. Damners' favourite musical textures are odd and particularly British: basic rhythm boxes, brass sections in full cry, and a variety of cheesy keyboards and fairground and cinema organs.
There’s a brace of very strong songs with very good tunes. Two of them sounded even better as hit singles: “Stereotypes” and “Do Nothing”. But others are good enough to be hits too: the kitchen sink drama of “I Just Can’t Stand It”, the sad tale of “Pearl’s CafÃ©”.
While the tunes are jolly, the lyrics are bleak. English life is portrayed in all its drab, suffocating despair and there’s no way out. The “Poor Little Rich Girl” escapes to London only to end up in porn films. The air flight of “International Jet Set” is a claustrophobic nightmare which ends with the passengers screaming as the plane crashes. The irony of the two versions of “Enjoy Yourself” is very black indeed. It’s certainly accurate; life in Britain wasn’t much fun around then. But there are times when this unremitting gloom tips over into self-parody. And the second, dub half of Stereotypes is self-indulgent, while “Sock It To ‘Em JB” and “Holiday Fortnight” are filler.
The album sounds like a first draft of the Specials finest hour. Nine months later, Dammers organised all the different elements here together into “Ghost Town”, one of the greatest number one singles in UK pop history. After that the group fragmented. So More Specials has lots of quality, and is almost a classic.