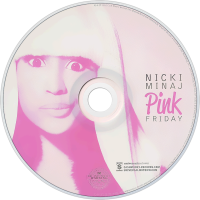 Pink Friday is the debut studio album by hip hop recording artist Nicki Minaj. It was released on November 19, 2010 in standard and deluxe editions through Young Money Entertainment, Cash Money Records, and Universal Motown. The intended lead single from the album, "Massive Attack", was commercially unsuccessful, and was therefore removed from Pink Friday. The album was preceded by the singles "Your Love" and "Right Thru Me" which were released in June and September 2010, respectively. "Your Love" reached number one on the Hot Rap Songs chart, while "Right Thru Me" peaked at number two. In addition, a previously released joint single between American rapper will.i.am and Minaj, "Check It Out", appears on the album. A third single, "Moment 4 Life", featuring Canadian rapper Drake was released in December 2010 and topped the Hot Rap Songs chart in the US.

"Roman's Revenge", which originally featured rapper Eminem was remixed to feature Minaj's labelmate Lil Wayne, and was released as a promotional single on January 19, 2011. After being released as Pink Friday's fourth single, "Did It On'em" received positive reviews from critics, eventually peaking at number 4 on the US Rap Songs chart. "Girls Fall Like Dominoes" was released as a single in Australia and the U.K. as the sixth single overall. It samples "Dominos" by British indie rock band The Big Pink. On May 13, 2011, "Super Bass", a bonus track from the deluxe version of Pink Friday, was released as a single. It is one of Minaj's most successful singles, reaching number 3 on the Billboard Hot 100. The seventh single from the album, "Fly", features Barbados singer Rihanna, and was released on August 30, 2011. It has since peaked at number 19 on the Hot 100.

Pink Friday features production styles crossing the genres of pop, hip-hop and R&B. Contributions to the album's production came from a wide range of producers including J.R. Rotem, Bangladesh, Swizz Beatz, T-Minus and will.i.am. After a much anticipated release as the result of Minaj's extensive featured appearances on the singles of other artists, Pink Friday debuted at number two on the US Billboard 200 chart with first-week sales of 375,000 copies. Ultimately reaching number one on the chart, it has been certified platinum by the Recording Industry Association of America and, as of February 2012, had sold more than 1.7 million copies in the United States.